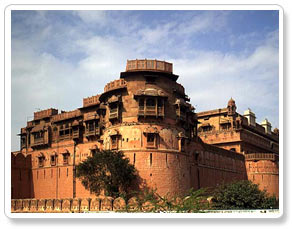 Bikaner is a city in the northwest of the state of Rajasthan in western India. The city is the administrative headquarters of Bikaner District. It was formerly the capital of the princely state of Bikaner. The city was founded by Rao Bika in 1486 and from its small origins it has developed into the fourth largest city in Rajasthan. The Ganga Canal completed in 1928 and the Indira Gandhi Canal completed in 1987 has allowed the farming of crops such as mustard, cotton and wheat. Other industries include wool production and the mining of gypsum, plaster of Paris and bentonite.
Bikaner (princely state) was founded in the 15th century and persisted until shortly after India's Independence in 1947. Earlier this region was known as Jangladesh which was a region of northern Rajasthan state in India. It included the present-day districts of Bikaner, Churu, Ganganagar, and Hanumangarh.

In the 15th century the Jangladesh region was occupied by Rajput clans, Jats, and Muslims. About 1465 Bika, a Rathor Rajput, sixth son of Rao Jodha, king of Marwar, started out to conquer the country. By taking advantage of the rivalries of the clans he succeeded; in 1485 he built the small fort at the capital which still bears his name, and in 1488 began the building of the city itself. He died in 1504, and his successors gradually extended their possessions. In the reign of the Mughal emperor Akbar the kings of Bikaner were esteemed among the most loyal adherents of the empire, and in 1570 Akbar married a daughter of Rao Kalyan Singh. Kalyan's son, Rai Singh, who succeeded him in 1571, was one of Akbar's most distinguished generals and the first Raja of Bikaner; his daughter married Salim, afterwards the emperor Jahangir. Two other distinguished chiefs of the house were Raja Karan Singh (1631-1669), who in the struggle of the sons of Shah Jahan for the throne threw in his lot with Aurangzeb, and his eldest son, Anup Singh (1669-1698), who fought with distinction in the Deccan, was conspicuous in the capture of Golconda, and earned the title of maharaja.

From this time forward the history of Bikaner was mainly that of the wars with Marwar, which raged intermittently throughout the 18th century. In 1802, during one of these wars, Mountstuart Elphinstone passed through Bikaner on his way to Kabul; and Maharaja Surat Singh (1788-1828), applied to him for British protection, which was, however, refused. In 1815 Surat Singh's tyranny led to a general rising of his thakurs, and in 1816 the maharaja again applied for British protection. On 9 May 1818 a treaty was concluded, and order was restored in the country by British troops. Ratan Singh, who succeeded his father in 1828, applied in vain in 1830 to the British government for aid against a fresh outbreak of his thakurs; but during the next five years banditry became so rife on the borders that the government raised a special force to deal with it (the Shekhawati Brigade), and of this for seven years Bikaner contributed part of the cost. Henceforth the relations of the maharajas with the British government were increasingly cordial. In 1842 Ratan Singh supplied camels for the Afghan expedition; in 1844 he reduced the dues on goods passing through his country, and he gave assistance in both Sikh campaigns. His son, Sardar Singh (1851-1872), was rewarded for help given during the Revolt of 1857 by an increase of territory. In 1868 a rising of the thakurs against his extortions led to the despatch of a British political officer, by whom affairs were adjusted.

Sardar Singh had no son, and on his death in 1872 his widow and principal ministers selected Dungar Singh as his successor, with the approval of the British government. The principal event of his reign was the rebellion of the thakurs in 1883, owing to an attempt to increase the dues payable in lieu of military service; this led to the permanent location at Bikanir of a British political agent. Dungar Singh died in 1887 without a son; but he had adopted his brother, Ganga Singh (born 1880), who succeeded as 21st ruler of Bikaner with the approval of the government. He was educated at the Mayo College at Ajmer, and was invested with full powers in 1898. He attended King Edward's coronation in 1902, and accompanied the British army in person in the Chinese campaign of 1901 in command of the Bikaner Camel Corps, which also did good service in Somaliland in 1904. For his conspicuous services he was given the Kaisar-i-Hind medal of the first class, made an honorary major in the Indian army, a G.C.I.E., a K.C.S.I., and A.D.C. to the Prince of Wales. The military force consisted of 500 men, besides the Imperial Service Corps of the same strength.

The state owes to this ruler the opening up of new railways across the great desert, which was formerly passable only by camels, and the tapping of the valuable coal deposits that occur in the territory. The railway from Jodhpur had been extended towards Bhatinda in the Punjab; on the northern border, the Ghaggar canal in the Punjab irrigated about 5000 acres (20 km²).

Drought is a common occurrence, and the region faced the most severe famine in 1899-1900. In 1901 the population was 584,627, showing a decrease of 30% due to the results of famine. The schools included a high school affiliated to the University of Allahabad, a school for the sons of nobles, and a girls' school called after Lady Elgin. The famine of 1899-1900 was severely felt.

When Maharaja Ganga Singh died in 1943 he was succeeded by the last reigning Maharaja, Sadul Singh, who acceded his kingdom to newly-independent India on 7 April 1949.