Taj Mahal is a white marble mausoleum in Agra, northern 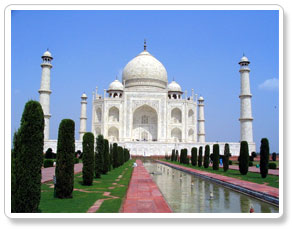 India, completed in 1643 in memory of Mumtaz Mahal, the wife of Mughal emperor Shah Jahan.

In 1631, Shahjahan went on an expedition to the south and, as always, Mumtaz Mahal accompanied him. But she died in child birth at Burhanpur. The garden had been laid by Raja Man Singh of Amber and now belonged to his grandson, Raja Jai Singh. By a royal firman, Shahjahan gave Jai Singh four havelis in exchange for the garden. The site was also chosen because it was located on a bend in the river, and so could be seen from Shahjahan’s personal palace in Agra Fort, further upstream She had borne Shahjahan fourteen children, of whom four sons and three daughters survived. When Mumtaz Mahal died, she was just 39 years old. Shahjahan was inconsolable and contemporary chronicles tell of the royal court mourning for two years.

There was no music, no feasting, and no celebration of any kind. Work on the mausoleum began in 1633 and 20,000 workers laboured for 17 years to build it. The most skilled architects, inlay craftsmen, calligraphers, stone-carvers and masons came from all across Indian and lands as distant as Persia and Turkey. The master mason was from Baghdad, an expert in building the double dome from Persia, and an inlay specialist from Delhi. Yemen sent agates, the corals came from Arabia, the garnets from Bundelkhand, onyx and amethyst from Persia. Mumtaz Mahal’s final resting-place was ornamented like a queen’s jewel-box. The UN in 1983, declared the Taj a World Heritage site. Shahjahan decided to erect a memorial to his queen in pristine marble that the world would never forget. The site selected for the tomb was a garden by the Yamuna river, unshadowed by any other structure.