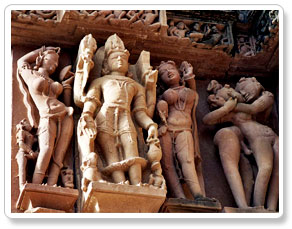 Places to see in Khajuraho :
At a point of time in history there were 85 temples, but only 20 have survived the ravages of time. The temples are made of sandstone blocks fitted together and are aligned east west. For convenience, these may be divided into western, eastern, and southern groups of temples. There are many temples as, The Kandariya Mahadeo, The Lakshmana Temple, Chaunsat Yogini, The temple of Parsvanath, temple of Ghantai and the temple of Duladeo, which amuse and excite the visitors.

How to reach :
By Air - A daily Boeing 737 of Alliance Air links khajuraho with Delhi, Agra, and Varanasi.

By Rail - The nearest railheads are Harpalpur (94 km) and Mahoba (63 km). Country buses and tongas take you to khajuraho. The Shatabdi Express from Delhi to Bhopal stops at Jhansi (172 km from khajuraho). Satna, 117 km away, is convenient for travelers from Mumbai (Bombay), Calcutta, and Varanasi. Taxis and buses are available from here.

Best Time To Visit Khajuraho : -
Khajuraho's climate is quite extreme, with wide variation in day and night temperatures along with minimal rainfall. Summers are hot at 45°C and winters pleasant at 27°C. Rainfall of normally 114 cms annually. As summer is too hot, winter is a good time to visit. A good time to visit is March, when the annual Khajuraho Dance Festival takes place. So the best time to visit Khajuraho is from September to March.