The Akshardham Temple in Delhi which attracts approximately 70 percent of all tourists who visit Delhi. The Akshardham temple was officially opened on 6 November 2005. The monument, at the center of the complex, was built off of the Vastu Shastra and Pancharatra Shastra. The complex features a large central monument crafted entirely of stone, 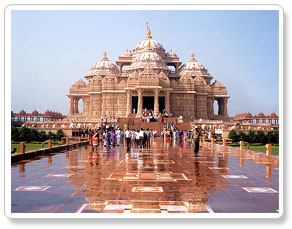 exhibitions on incidents from the life of Swaminarayan and the history of India, an IMAX feature, a musical fountain, and large landscaped gardens. The temple is named after a belief in Swaminarayan Hinduism.