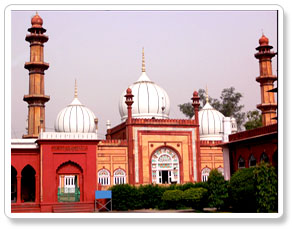 Raised on the highest pedestal of Delhi, Jama Masjid signifies grandeur. Built of Red-stone Jama Masjid, also known as Masjid - e - Jahanuma, is the largest mosque in India. Jama Masjid is main mosque in capital city Delhi. This was apparently the last monument erected by Shah Jahan before he was put captive by his son, Aurangzeb. The construction of the Jama mosque began in 1650 and was completed in the year 1656. The Jama Masjid stands on a rock apparently the highest point of the southern ridge of Arravalies. This sand stone marvel has 3 massive double-storied gateways. There is one gate each on the north, south and east of the main building to reach the courtyard. The eastern gateway is considered to be the most important as this gate was for exclusive use of the Royal Family to enter the courtyard.

The architect of this magnificent mosque was Ustad Khalil. The main feature of the mosque is its four-storied minarets, which are 130 feet high. Apart from that, Domes too, will attract your fancy. These are full domes shaped like a drum at their base. The decoration is unique in itself, as it has been done with the alternative pattern of marbles in black and white. This pattern can be seen in all the three domes. Enclosed by pillared and corridors with domed pavilions at the corners, the courtyard of the mosque measures around 1000 square meters and has a capacity of 100,000 people. In the center of the courtyard is a tank and Hauz. This was built for the purpose of Wazu, compulsory ambulation done before Namaaz. In front of it is a raised platform called Dikka. The mosque is so big that in muatllawi (the second cleric), used to stand on the Dikka and repeat the Ayats said by the Imam (the chief cleric) to the devotees who were unable to hear him.

On the west is the rectangular prayer hall, which measures 60 meters by 28 meters. It has a splendid façade. It has as many as 12 arches decorated with marble frame same as in the case of Domes. If you want to know about the history of the place, the inscriptions are there to inform. such as the cost of building the mosque, the architect and the builder, which in this case is one Nur Allah Ahmed. The chief cleric, Imam Bukhari, is the direct descendant of the Mullah who came from Bukhara to inaugurate the Jama Masjid. He came on 23rd July 1656, at the invitation of the Mughal Emperor Shah Jahan.

Visitors can climb the southern minaret on nominal charge. Be careful at the top, as the Jaalis are fragile. The views are just wonderful as one can see the whole Old Delhi and the impressive Red Fort. Women are not allowed to go alone to the top of the minaret.

Best Time To Visit Jama Masjid Delhi : -
Being a religious place you can visit jama masjid any time during the year. But best time to visit is from September to March when the weather is pleasant.