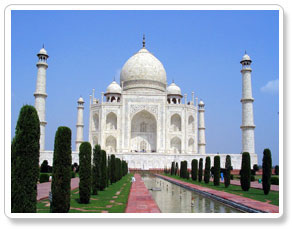 Arrive at New Delhi. Meeting and transfer to hotel. Overnight stay at the hotel.

Day 3 Delhi - Agra (Drive distance 205 Kms. / Drive time under 4 hrs. approx.)
Morning after breakfast at the hotel drive to Agra. Arrive at Agra and check in at the Hotel. Later visit to Taj Mahal - visit to the world famous ‘Taj Mahal’ by ‘decorated tongas’. The inimitable poem in white marble, built over a period of 22 years by the Mughal Emperor Shah Jahan in 1630 for his Queen Mumtaz Mahal to enshrine her mortal remains. Also visit Red Fort built by three generations of Mughal Emperors starting from Akbar the Great in 1565 AD, which is a masterpiece of design and construction. It housed both the residential Palaces of the Royal family, and the military quarters.
Overnight stay at the Hotel.

Day 4 Ranthambore Via Fatehpur Sikri and Bhatpur Bird Sanctuary
Depart by car for Bharatpur and board train to reach Ranthambore. 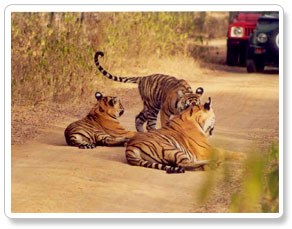 Enroute visiting of FATEHPUR SIKRI : A fascinating ghost town, lies a little beyond Agra the deserted Red sandstone city that was built by Emperor Akbar as his capital. It was a veritable fairy tale city and its ruins are still in a pristine condition. Set like a jewel in a courtyard of pink sandstone is the marble tomb of the Saint Salim Chisti, enclosed by delicately carved marble screens.
Arrive Bharatpur and board your Horse Cart or Cycle Rickshaw for bird watching.
Keoladeo National Park or Bharatpur Bird Santuary is spread over an area of little over 232 sq kms and derives its name from the Shiva Temple in the heart of the sanctuary. Formerly known as the Bharatpur Bird Sanctuary, ornithologist Salim Ali, is credited for bringing this park to public notice.
The park supports a population of 375 species of birds, numerous mammals and reptiles. With the onset of winter, migratory birds from all over world come here. They arrive by August and leave in February. Visitors include Coot Snipes, Spanish Sparrow, Red Crested Porhard, Rosy Pelican and Flamingo. The special attraction, however, remains the arrival of the rare Siberian Crane. The park is also rich in Pythons, Spotted Deer, Sambhars, Blue Bull, Black Buck, Jackals, Otters, Fishing Cats, Monitor Lizards.
Later proceed to Bharatpur Railway Station to board train for short journey to Sawai Madhopur at 3.40 PM. Meeting on arrival at Sawai Madhopur Railway Station at 6 PM and transfer to your booked hotel for overnight stay.
The Ranthambore National Park was the hunting ground of Maharaja of Jaipur. In 1955, it was declared a game sanctuary; in 1980, it became a national park. But with the commissioning of Project Tiger in 1972, it was included in the project. With the addition of neighbouring Keladevi and Mansingh sanctuaries, the total area of the national park stands at 1,334 sq km. But the entire park - the core area is just 392 sq kms - is not open to the public. The Ranthambore Park is set between the Aravalli and Vindhya ranges. Its deciduous forests were once a part of the magnificent jungles of Central India. The terrain is rugged and there are rocky ridges, hills and open valleys with lakes and pools.
Ranthambore is a heritage site because of the picturesque ruins that dot the wildlife park. There are lake palaces, 'chhatris', old fortifications and a majestic 1,000-year-old fort, overlooking the park. The lovely Jogi Mahal is located at the foot of the fort and gives magnificent view of the Padam Talao, painted white with water lilies. The Ranthambhore park is famous for tigers and due to conservation efforts, the tiger population has stabilized if not increased here. The tigers can be spotted quite often even during the day, at their normal pursuits-- hunting and taking care of their young ones

Day 5 At Ranthambore Wildlife Reserve
Early morning board your open air jeep to pay your first visit to the National park. Return to the hotel for lunch and rest. Afternoon around 3.30 PM leave again to the park to view wild life. Overnight at the hotel. 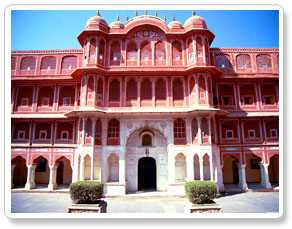 Early morning board your waiting jeep to pay your last visit to the National park for animal viewing. Return to the hotel for breakfast. After breakfast depart by car to Jaipur in around 4 hours time. Arrive and check in at the hotel Rest of the time free to relax. Evening walking tour of old pink city of Jaipur. Overnight stay at the Hotel.

Day 7 Jaipur City Tour
Morning after breakfast at the hotel excursion to AMBER FORT - Amber is the classic romantic Rajasthani fort palace. Its construction was started by Man Singh I in 1592, and completed by his descendent Jai Singh I. It's forbidding exterior belies an inner paradise where a beautiful fusion of Mughal and Hindu styles finds it's ultimate expression. Drive pass HAWA MAHAL - The ornamental facade of this "Palace of Winds" is a prominent landmark in Jaipur. Its five-storey structure of sandstone plastered pink encrusted with fine trelliswork and elaborate balconies. The palace has 953 niches and windows. Built in 1799 by Pratap Singh, the Mahal was a royal grandstand for the palace women.
Afternoon tour of Jaipur city where you will visit CITY PALACE - A delightful blend of Mughal and traditional Rajasthani architecture, the City Palace sprawls over one-seventh of the area in the walled city. It houses the Chandra Mahal, Shri Govind Dev Temple and the City Palace Museum and JANTAR MANTAR - This is the largest and the best preserved of the five observatories built by Jai Singh II in different parts of the country. This observatory consisting of outsized astronomical instruments is still in use.
Overnight at Jaipur.

Day 8 Drive to Deogarh ( By Car )
Morning after breakfast at the hotel proceed to Deogarh in around 4 and half hours and check in at Palace hotel on arrival. Deogarh Mahal was restored and run by the erstwhile ruling family the area and is one of the best-maintained and run palace hotel. The palace hotel also has an extremely impressive collection of old miniature paintings - in fact, the Deogarh School of Painting was one of the most important school of Indian miniature paintings.
Aftenoon is free to explore this palace hotel and enjoy the facilites available or opt a short walk / trek in surrounding areas. Overnight at the hotel. 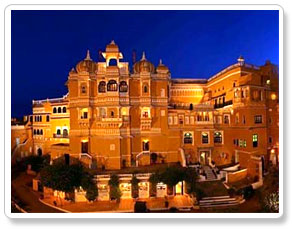 Day 9 Deogargh - Udaipur ( By Car )
Morning after breakfast at the hotel. Depart for Udaipur via taking diversion to visit Kumbhalgarh and Ranakpur Jain temples
.Kumbhalgarh - located in the most rugged of the Aravali in Pali, Rajsamand and Udaipur districts of Rajasthan. It takes name after the impressive historic fort of Kumbhalgarh, which come into view over the Park. It is 578 sq Kms in area and at an altitude of 500 to 1,300m. It is home to a very large variety of wild life, some of which are highly endangered species. The wild life includes wolf, leopards, sloth bear, hyena, jackal, jungle cat, smabhar, nilgai, chaisingh (the four horned antelope), chinkara and hare.
Ranakpur. - The beautifully sculptured Jain temples lie in a tranquil valley of the Aravallis. The main 'Chaumukha Temple' is dedicated to the Tirthankara Adinath and has 29 halls supported by 1444 pillars, all distinctly carved. Two Jain temples dedicated to Neminath and Parsvanath and a Sun Temple a little distance away, are also noteworthy.
Continue driving to Udaipur and check in at the hotel on arrival. Rest of the time at leisure. Overnight at the hotel. 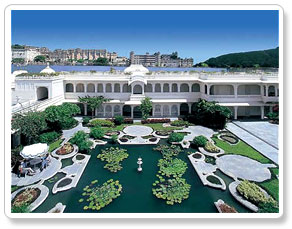 Day 11 Udaipur - Pushkar
Morning after breakfast at the hotel proceed to Pushkar in around 4 to 5 hours and check in at the hotel on arrival. Afternoon visit Brahma temple, holy lake of Pushkar and the town. Overnight at the hotel.

Day 12 Pushkar - Delhi - Onward Destinations
Breakfast at the hotel. Day is free for camel ride and shopping and later drive to Delhi and transfer directly to airport for onward destination.