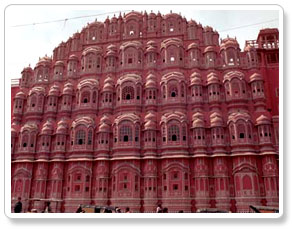 Jaipur which means the city of victory was built exactly 273 years back and is 262 km by road from Delhi (Capital of India). A strong wall encircles the old city and even today has a suggestion of formidable strength, its function of protecting all within is obvious.

There is a feast in store for tourists. Attractive monuments where one can breathe the fragrance of history. Comfortable and luxurious hotels, once the proud of kings, parks, gardens, and excursions of nearby places of interest, make Jaipur a tourist's paradise.

Architecture : A young Bengali architect, Vidyadhar Bhattacharya formalized the city’s plans in a grid system. The wide straight avenues. Roads, streets, lanes and uniform rows of shops on either side of main bazaars were arranged in nine rectangular city sectors, in accordance with the principles of town planning set down in the ‘Shilpa Shastra’- and epochal treatise on the Hindu architecture.

Nahagarh Fort : Nahagarh Fort stands on the edge of the Aravalli Hills, overlooking the pink city of Jaipur in the Indian state of Rajasthan. The view of the city from the fort is breath taking. Along with Amber Fort and Jaigarh Fort it formed a strong defence ring for the city. During the Sepoy revolt of 1857, Nahagarh served as a refuge for Europeans fleeing from the havoc created by mutineers in neighboring states. The word Nahargarh means the abode of tigers. Legends say that it was name after Prince Nahar whose spirit haunted the place and obstructed construction of the fort.

Amber Palace : The Amber Palace complex overlooking the artificial lake south of the town of Amber is one of the most popular tourist sites in the city, famous for its mixture of Hindu and Muslim architecture, and offering elephant rides from the town up to the palace courtyard. Although the structure is today known as Amber Fort, the complex was initially a Palace Complex within the Fort of Amber which is today known as Jaigarh fort.

Jaigarh Fort : The Jaigarh Fort on the hills above the Amber Palace complex offers stunning views of the foothills of the Aravalli range, as well as attractions such as immense underground water-storage tanks, a medieval canon foundry and an impressive collection of medieval cannons including the Jaivana which is reputed to be the world's largest cannon on wheels.

Jantar Mantar : The Jantar Mantar is a collection of architectural astronomical instruments, built by Maharaja Jai Singh II at his then new capital of Jaipur between 1727 and 1733. It is modelled after the one that he had built for him at the then Mughal capital of Delhi.

Galtaji Galtaji : is an ancient Hindu pilgrimage site situated 10 km from Jaipur in Indian state of Rajasthan on Jaipur-Agra highway near Sisodia Rani Ka Bagh. It is believed that Saint Galav spent his life here and did meditation. The main temple here is temple of Galtaji in pink stone and has a huge complex. The temple has a number of pavilions with rounded roofs, exquisitely carved pillars and painted walls. The temple is surrounded by natural springs and reservoirs that are considered holy .There are seven tanks here and the Galta Kund is considered the holiest. A large number of people take a holy bath in these tanks especially on Makar Sankranti.

There is a timeless appeal to Jaipur’s colorful bazaars where one can shop for Rajasthani handlooms and trinkets. Beautifully laid out gardens and parks, attractive monuments and marvelous heritage hotels, once the residence of Maharaja’s are worth admiration. Not to mention the ambling camels and cheerful people in multi-hued costumes that makes your trip to the pink city a memorable

Best Time To Visit Jaipur :
jaipur is one of the tourist place of north india golden triangle and you can visit any time to this tourist place in calender year but the best and pleasant time to visit Jaipur is July to April.