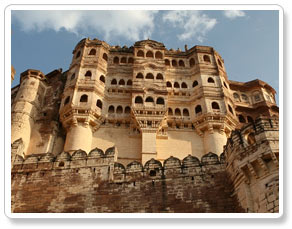 Jodhpur Fort Set at the edge of the Thar desert, the imperial city of Jodhpur echoes with tales of antiquity in the emptiness of the desert. Once the capital of the Marwar state, it was founded in 1459 A.D. by Rao Jodha-chief of the Rathore clan of Rajputs who claimed to be descendants of Rama - the epic hero of the Ramayana. The massive 15th century A.D. Mehrangarh Fort looms on the top of a rocky hill, soaring 125 Mts. Above the plains. The city is encompassed by a high wall -10 km long with 8 gates and innumerable bastions. A major trade centre of the 16th century A.D. the fortress-city of Jodhpur is now the second largest city of Rajasthan.

The second largest city in Rajasthan, Jodhpur has been the hub of Marwari traders since time immemorial. The Mehrangarh Fort rises dramatically out of the rugged mountainside and is surrounded by the blue washed houses that dominate the city's landscape. Started in 1459 by Rao Jodha, the fort compound has various later structures that are more ornate and decorative - the Phool Mahal, Takhat Mahal, Moti Mahal and Jhanki Mahal. In contrast to the medieval fort is the early 20th century Umaid Bhavan Palace a magnificent mix of Rajput and European architecture - built by Maharaja Umaid Singh to flaunt his princely power. The palace museum is a reminder of this grand past, while if you really want to feel like royalty you can live in the luxury hotel that occupies a part of the palace. Jodhpur brings to mind a bygone era with its old havelis, bustling bazaars and loads of rustic charm. The enigmatic city that was once

Places to Visit In Jodhpur :

Mehrangarh Fort :
Located atop a 125 m high hill, the Mehrangarh Fort lies at the outskirts of Jodhpur city. The magnificent Mehrangarh Fort (Jodhpur ka kila) is one of the most majestic and colossal forts in India. The fort was originally started (c.1459) by Rao Jodha, founder of Jodhpur. However, most of the extant fort dates from the period of Jaswant Singh (1638-78). The walls of the fort are up to 36 m high and 21 m wide; they enclose some lovely structures. The beauty andthe grandeur of numerous palaces in the fort narrate a saga of hard sandstones yielding to the chisels of skilled Jodhpuri sculptures. Noteworthy of these palaces are the Moti Mahal, the Phool Mahal, the Sheesh Mahal, the Sileh Khana and the Daulat Khana. There is a museum inside this fort which contains wonderful collection of palanquins, howdahs, royal cradles, miniatures, musical instruments, costumes and furniture.

Umaid Bhavan Palace :
This massive palace is one of India's most recent palaces. The romantic looking Umaid Bhavan Palace was actually built as a public relief and employment project during a long period of drought. A special type of sandstone, called Chittar sandstone, has been used in the construction of this palace and this gives it a special effect. For this reason, it is also referred to as Chittar Palace by the locals. The palace was designed by H.V. Lanchester The palace was completed in 16 years. Part of this magnificent sand stone and marble palace containing over 300 rooms have been converted into a museum, deluxe hotel and a royal residence.

Sardar Market :
These colourful markets are located in the heart of Jodhpur. It has a wide range of Rajasthani handicrafts. Narrow lanes lead to little shops selling antiques, silverware and a wide range of handicrafts and regional textiles.

Jaswant Thada :
A collection of royal crematorium including that of Maharaja Jaswant Singh II, in white marble, is situated in the close proximity to Mehrangarh fort. Built in 1899, the cenotaph also houses the portraits of the rulers of Jodhpur. There is some beautiful marble lattice work. Jaswant Thada.

Mandore Garden :
Located at the distance of 8 km north of Jodhpur, Mandore is the ancient capital of Marwar. The main attraction of Mandore is Mandore Garden. The extensive garden is beautifully laid with high rock terraces. Garden is open to visitors daily from sunrise to sunset. There is a famous 'Hall of Heroes' here that contains 16 colossal figures carved out of a single rock wall. This garden also had a small museum. It houses the royal cenotaphs of Maharaja Ajit Singh.

Best Time To Visit Jodhpur :
Jodhpur is second largest city of Rajasthan and famous for its tourist attractions in jodhpur and surrounding areas so best time to take the glimpse of these famous places is from August to March when the atmosphere is pleasant.