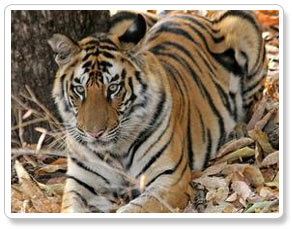 Bandhavgarh Tiger Reserve is located between the Vindhyan hill range and the esstern flank of Satpu8ra hill range, and falls in the Shahdol and Jabalpur districts of the Indian state of Madhya Pradesh.

The Reserve gets its name from the highest hill, Bandhavharh (807m),located in the center of the Reserve. A chain of smaller hills, thirty -two in all, surround this hill forming a number of valleys and spurs in between. Bertica cliffs are more prominent around number of grassy meadows, such as Chalradhara, Rajbsahera, is of sandstone, water percolates through it, forming a number of perennial streams and springs. The western parts of the Reserve and Panpatha Sanctuary area are more of less plain. The hills are mainly flat- topped. The meadows in certain areas ate marshy.

Sal trees cover low, undulating and plain tracts and degenerate in growth and quality as they ascend he hill slopes, giving place to mixed forest on the upper slopes, mainly due to edaphic factors. Gregarious flowering of bamboo in year 1984-85 has resulted in profuse regeneration all over, which is giving good cover to all animals.

A few rare species such as the insectivorous plant Drocera peltata and medicinal plants such as Buch (Acorus calamus are found in some isolated patches of Tata range of the Reserve. The rivers Johilla and Son flowing on the eastern side, the river Umrar passing through thewestern fringes and the landmarks of the Reserve. Bandhavgarh has been an excellent habitat of the tiger and is Known for its highest density of tiger population in the world.
Location of Bandhavgarh National Park :Set amidst Vindhya ranges, altitude varies from 44-81m (144-2660ft0 above sea leavel. Khajuraho,210km (130 miles) from park,is nearest airport it is a five-hour drive from here to Tala Nearest railheads are Jabalpur(164km;100miles)., Katni(102 km; 63 miles) and Satna(112km;70 miles) on the Central Railway and Umaria (32km; 20 miles) on the Southeastern Railway.

When to go (Bandhavgarh National Park ) ( best time to visit ) : February to May is favourable; park remains closed from beginning July to end October).

Facilities at Bandhavgarh National Park :Accommodation provided by the MPSTDC (Wriite Tiger Forest Lodge) and many private lodges at Tala (Bandhavgarh Jungle Camp - former Maharaja of Rewa's palace - and Tiger Trails). Visitors may enter park in their own vehicles (petrol only as diesel banned here); alternatively hire a taxi at Tala (park entry point). Park open from dawn to dusk. At entry gate, trained guides with interpretive skills can lead visitors through the park.

Conservation History
The Bandhavgarh Fort, in the centre of the Reserve, atop the Bandhavgarh hill, was the seat of rulers of Rewa State, until they shifted to Rewa town in 1617 A.D. After independence and abolition of the princely States, the process of degradation of forests started due to relaxed control. Maharaja Martand Singh of Rewa, was deeply moved by the destruction of forests. On his proposal an area of 105 sq. km. was declared as National Park in 1965. The area of the park was increased to 448.84 sq. km. in 1982.

Bandhavgarh has been an excellent habitat of tiger and is known for the highest density of tigers in the world. Considering the importance and potentiality of the National park, it was included in the Project Tiger Network in 1993. The adjoining Panpatha Sanctuary too was declared as a part of the Reserve.

Archeology
Mythologically the fort was built by Lord Rama for his brother Laxman, during Ramayan period. There are a number of man made caves (35) in Bandhavgarh with inscriptions and carvings, which date back between about 129-168 A.D. Statues of various incarnations of Lord Vishnu, which were carved out of single rocks are found in the fort. "Sheshshaiya" the statue of lord Vishnu in reclining pose is the biggest of all and attracts every tourist. These statues date back to 10-11th Century A.D.