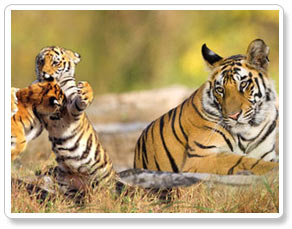 The Pench Tiger Reserve is named after the Pench river, which flows from north to south through the Reserve. The Reserve is located in the southern reaches of the Satpura hill ranges in the Seoni and Chhindwara districts in the Madhya Pradesh state of India. The terrain is undulating, with most of the area covered by small hill ranges, steeply sloping on the sides.

The Reserve is situated in an area that holds a significant place in the natural history of Central India. The description of its natural beauty, richness in flora and fauna has appeared in numerous wildlife books dating back to 17th century. Books written in the 19th and early 20th century by famous naturalists like Captain J. Forsyth and Rudyard Kipling's Jungle Book explicitly present the detailed panorama of nature's abundance in this tract.

An extensive forest belt extends in three directions, north, east and south, covering forest tracts of Seoni, Balaghat and Nagpur districts. The contiguous forest on the southern side in the Maharashtra state of India, initially notified as Pandit Jawaharlal Nehru National Park has been recently included in the Project Tiger network by the same name as this Reserve. A dam was constructed on the Pench river on south-eastern boundary of the Reserve.

The area is criss-crossed by numerous seasonal streams and nalas. The Pench river flowing through the central line of the Reserve is dry by the April-end but a number of water pools locally known as dohs are found, which serve as waterholes for wild animals. A few perennial springs also exist in this area. However, the water sources are not suitably distributed, hence large area remains unutilized by the wild animals. The Pench reservoir at the center of the Reserve is the only major water source during pinch period.

As the prey concentration is high along the Pench river, tigers usually inhabit this belt. Leopards, though, generally operate in the peripheral areas but are occasionally seen in deep forests also. Jungle cats are commonly seen. Leopard cats, Small Indian Civets and Palm Civets are common but seen very rarely.

Wild dogs are commonly seen in packs of 12 to 15, near Chhedia, Jamtara, Bodanala and Pyorthadi areas of the Reserve. Wild Boar is ubiquitous. Sloth bear occupy hilly, rocky out crops and favour mahul bel infested forest. Chinkara is present in very small number and is found in open areas around Turia, Telia, Dudhgaon villages. Jackals are seen occasionally in near Tekadi, Alikatta and Chhindimatta villages

Location of Pench National Park : In the Seoni and Chhindwara districts of southern Madhya Pradesh. The nearest airport is Nagpur, 93km (58 miles) from the park. The town of Seoni, 19km (12 miles) away, is the nearest railhead.

Getting to Pench National Park : Pench reserve lies on National Highway No.7 (NH7)j between Nagpur and Jabalpur. A car is essential in the park; car hire in Jabalpur, Seoni a(ld Nagpur. Visitors to Pench at present are true wildlife enthusiasts, although the.park is gaining in popularity.