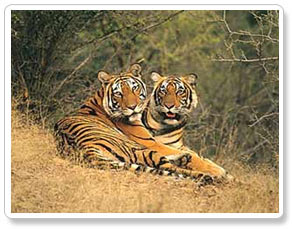 Ranthambhore National Park
The Ranthambhore National Park at the junction of the Aravalis and the Vindhyas, is a unique juxtaposition of natural and historical richness, standing out conspicuously in the vast, arid and denuded tract of eastern Rajasthan,barely 14 kilometer from the town, Sawai Madhopur. It spreads over a highly undulating topography varying from gentle to steep slopes; from flat topped hills (Indala, Doodh-Bhat and Chiroli) of the Vindhyas to the conical hillocks and sharp ridges of the Aravalis; from wide and flat valleys (Lahpur, Nalghati, Khachida, Anantpur etc.) to narrow rocky gorges. An important geological feature, the "Great Boundary fault' where the Vindhyas were brought against the much ancient Aravalis, passes from here.

Sawai Mansingh Sanctuary
The terrain is flat and rocky and some hills with gentle slopes. Devpura irrigation dam, in the Sanctuary is a useful source of water for wildlife and good habitat for aquatic flora and fauna.Keladevi Sanctuary

The Keladevi Sanctuary is northern extension of the Ranthambhore Tiger Reserve in Karauli and Sawai Madhopur districts. There are hills in the south, north and eastern parts. At many places, it has a curious feature of two separate ridges running parallel to each other. The forest between such ridges dense. The Sanctuary is bounded in the west by the river Banas and in the south by the river Chambal. The Banas finally flows into the Chambal.

Some gorges due to high moisture retention and cooler temperature are nature's treasure houses. They are locally known as "Khoh". The slopes of the Khohs are covered with dense forest. These Khohs are the most suitable habitat for wildlife. The main Khohs in Keladevi are Nibhera, Kudka, Chiarmul, Ghanteshwar, Jail and Chidi. The forest cover is fairly sparse and spread out in the other parts.

Location of Ranthambhore National Park :The Ranthambhore park and reserve lies in the desert state of Rajasthan on the main DelhiMumbai railway line and is readily accessible from Jaipur (145km; 90 miles). Sawai Madhopur, the nearest railhead and gateway to the park, lies 11 km (7 miles) away.

Getting to Ranthambhore National Park : - The nearest town is Sawai Madhopur, which has a good bus service with many connections.